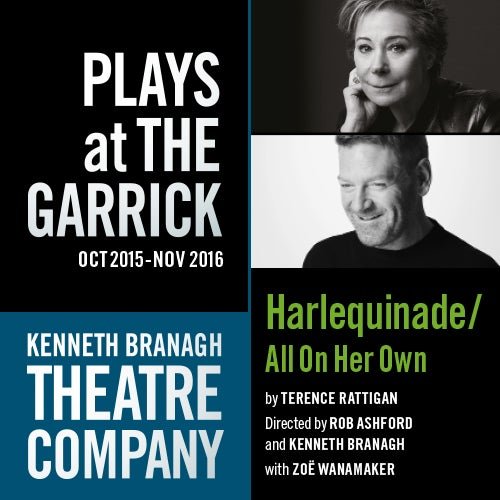 Harlequinade is a brilliant one-act comedy written by the legendary Terrence Rattigan. This brand new production stars Kenneth Branagh, co-directed by Rob Ashford. It's witty and acerbic, ridiculously funny, perfect if you're searching for great stage comedy. This rarely-seen but always popular comic gem was first performed in autumn 1948 at London's Phoenix theatre, and it's set for a dramatic revival. So what's the story?

In just one dreadful evening the unfortunate actor Arthur's world is turned upside down. And it happens just a few seconds before he's due to go on stage to play Romeo, with his unsuspecting wife Edna playing Juliet. He had absolutely no idea he was a father... and he can't quite believe that his daughter, a grown woman called Muriel, has just turned up. Worse still, she has a child with her, and presumably she's his granddaughter. Just when you think they can't, things get a lot worse when it turns out he's still married to Muriel's mother, Flossie, which makes a bigamist nonsense of his current marriage. A rip-roaring belly laugh of a play, you'll adore Terence Rattigan's affectionate celebration of crazy theatre folk.