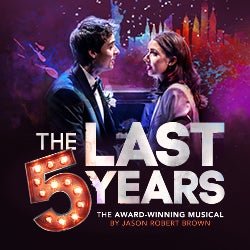 The Last Five Years is a brilliant musical by Jason Robert Brown. It has been produced Off-Broadway, in 2002, and has also been transformed into a 2014 movie. Since it first arrived on the stage it has been produced numerous times in the USA and beyond, and now it's going to enjoy a well-deserved run in the West End, at the Vaudeville Theatre. The plot examines the five year-long relationship between Jamie Wellerstein, who is a novelist about to break into the big time, and the struggling actor Cathy Hiatt, and it's presented in a highly unusual way that'll have you on the edge of your seat throughout.

Cathy tells her story backwards, beginning at the end and ending up at the couple's wedding, which happens half way through the show and is the only time the two characters meet. Jamie tells his story from the beginning, ending up at the wedding. The results are awesome, such a clever play packed with emotion and power. No wonder the plot has achieved cult status, and no wonder everyone's so thrilled it's on its way to London's theatreland. Will we see you there in autumn 2021?

Reviews Summary based on 5 reviews